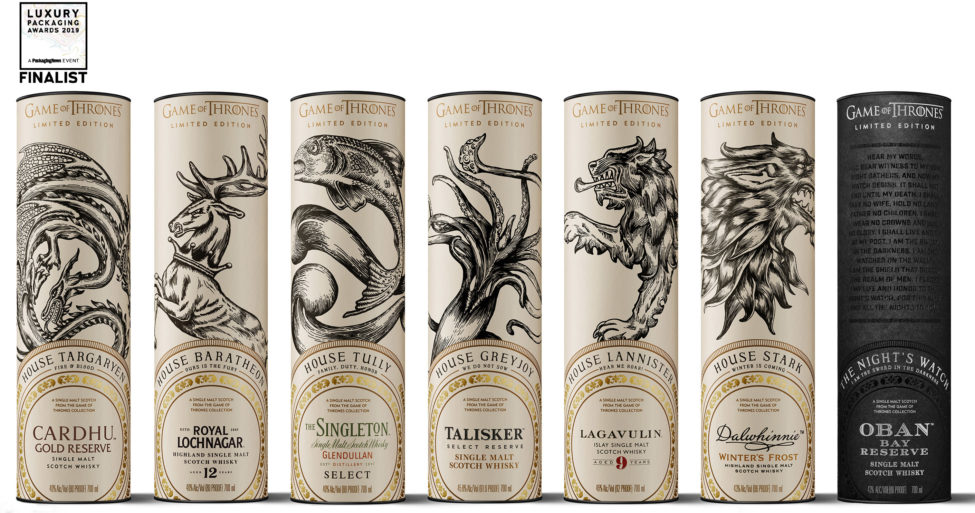 The collection features eight different Single Malt Scotch whiskies paired with one of the iconic Houses of Westeros, as well as The Night’s Watch, giving fans and drinkers an authentic taste of the Seven Kingdoms. The Limited Edition was released in conjunction with the highly anticipated final season of the hit television show.

Commenting on the shortlisting, Michael McLaren said: “We’re delighted with this recognition for The Game of Thrones Malt Whisky Collection, which is designed to appeal to both new whisky drinkers who are fans of the HBO hit show and regular Single Malt Scotch Whisky drinkers alike.

“Fans of both the show and the whisky brands were attracted to the pairing of the houses with the individual distilleries’ whiskies, the similarities of which were the inspiration behind the collection, drawing an authentic story line between each House and Single Malt pairing – for example, the power of water between both House Tully and The Singleton of Glendullan (whose brand icon is a salmon).

“The pack facilitates this broad-based consumer appeal and adds value to the brands through the skillful use of structure, graphical design, premium material selection, print, foil and emboss to create a highly desirable cohesive range of whiskies representing the pillars of the various Game of Thrones Houses. This is shown by the popularity of the collection and fact that the initial release sold out in record time and logged record buzz and interaction levels on social media.”

Celebrating high quality and beautifully designed packs from food, drinks and tobacco, to perfume, cosmetics and personal care, the Luxury Packaging Awards has become a much sought after accolade in the packaging sector.

Winners will be announced at the awards evening on Thursday 7 November 2019 at the Grosvenor House Hotel on London’s Park Lane.